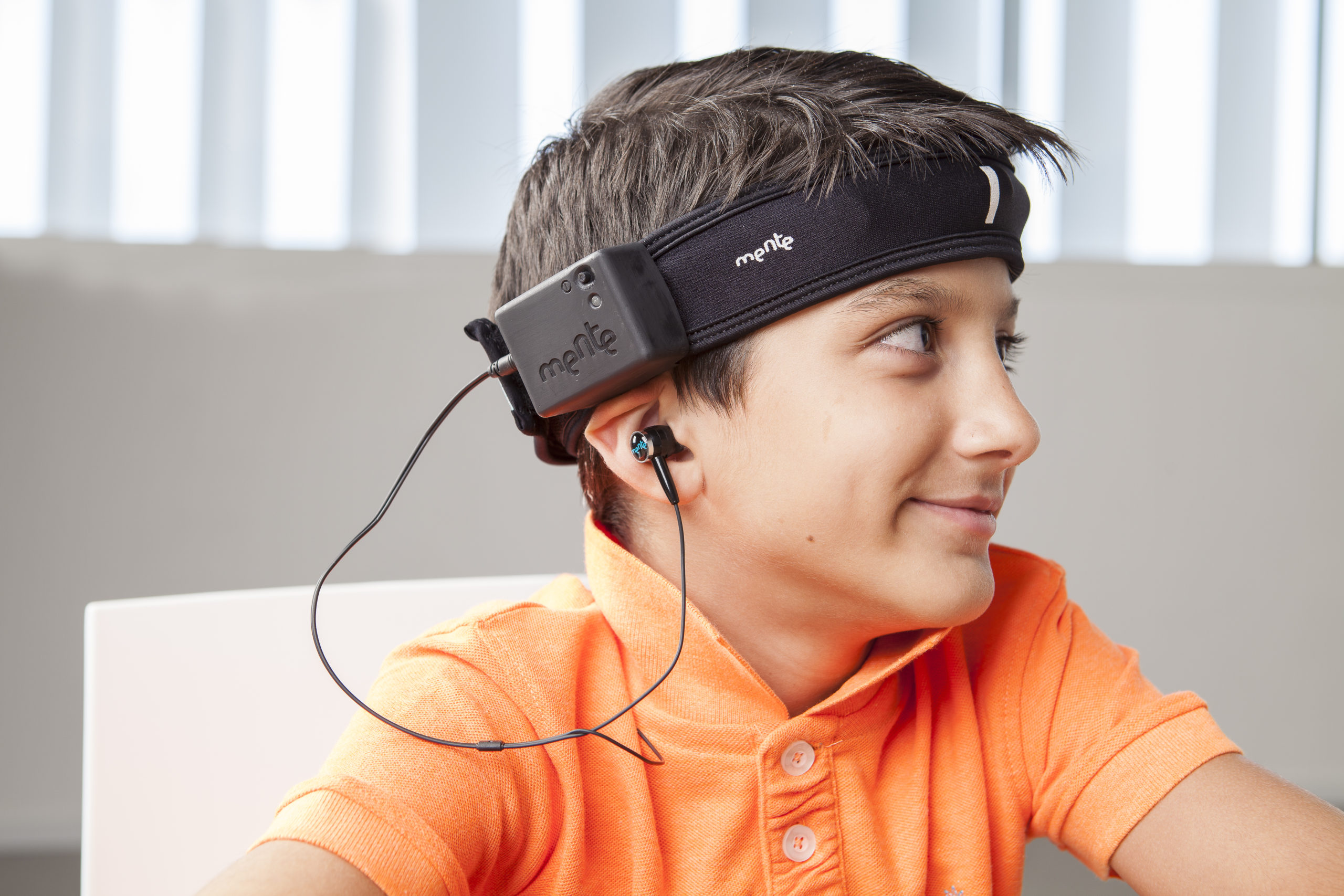 An Introduction To Mente

Neurofeedback aims to stabilize the brain-state activity by promoting neural plasticity, which is thought to improve self-regulation and behaviour. As research extensively showed, abnormalities in ongoing neuronal oscillations are associated with psychiatric and neurological disorders, thus neurofeedback can represent a promising complementary treatment to normalize dysfunctional neural patterns.

Mente is designed to offer a home-based neurofeedback treatment starting from the evidence that, among ASD children, a peculiar EEG profile can be observed. Overall, resting-state EEG studies on ASD suggest a U-shaped profile of electrophysiological power alterations (Wang et al. 2013), with excessive power in low-frequency (delta and theta) and high-frequency bands (beta and gamma) In addition, decreased alpha power was reported. These unbalanced brain pattern can lead to inattention, impulsivity and hyperactivity, obsessing, anxiety, sleep and memory issues.

Neurofeedback has been recognized as a suitable tool for detecting and modulating neural plasticity due to its ability to non-invasively alter the excitability of neural circuits and for inducing short-term functional reorganization in anatomically and functionally associated cortical and subcortical neural networks in the human cerebral cortex.

Mente uses a completely non-invasive approach using binaural beats [1]. It has been suggested that binaural beats can influence cognition and mental states, gently training brainwaves to fall into a predetermined specific brainwave pattern. In the case of Mente, the stimulation is contingent on the EEG and creates a closed-loop. The auditory entrainment was designed as this kind of training is slightly different from classical neurofeedback since it does not involve volitional control on the feedback from the user. However, learning and effects might be even more powerful.

This makes it particularly suitable for use in ASD children or people who may have difficulty with paying attention for extended periods, be able to engage, follow instructions or to stay focused on brain training activities, such as video games. In fact, most of the neurofeedback protocols require the participants to their attention on a specialized computer program during each session thus they have been utilized primarily with higher functioning individuals among ASD patients.

Compliance and benefits as a wearable solution 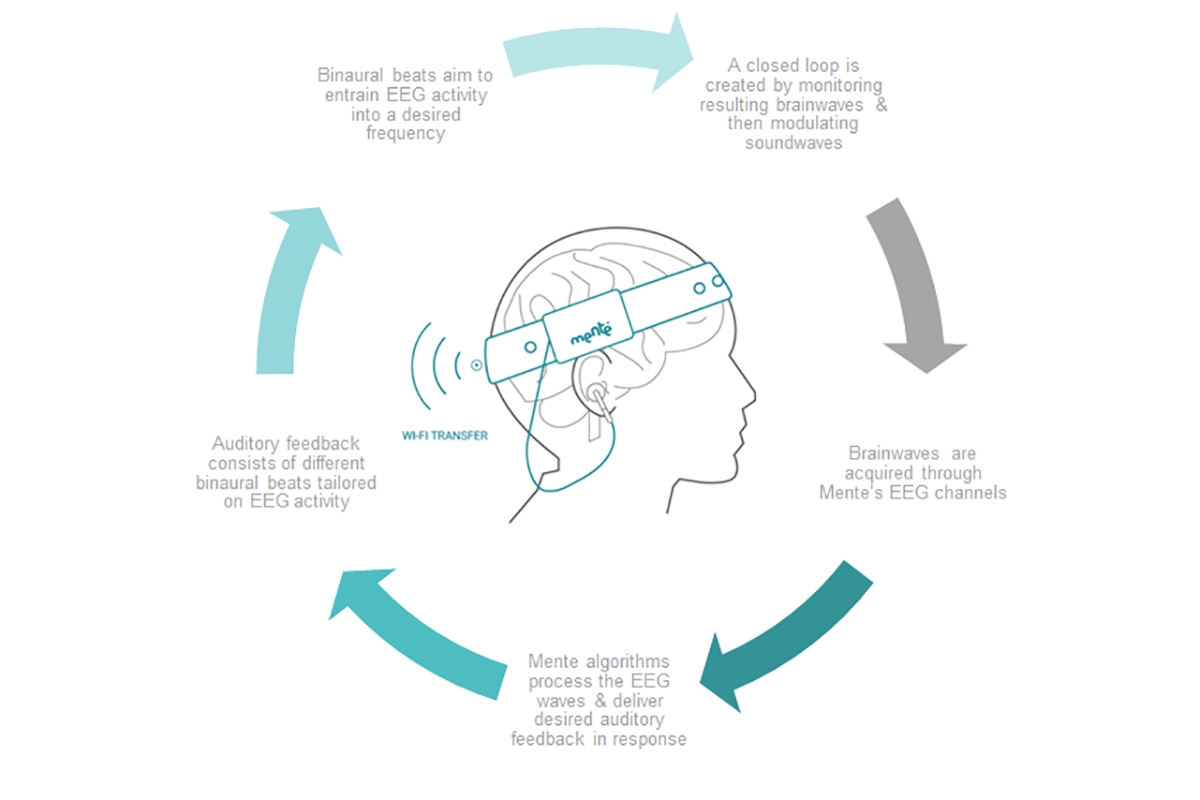 Mente is a medical-grade system which utilizes the EEG activity to provide a home-based neurofeedback training for children with neurodevelopmental disorders. The benefit of a home-based therapy can increase the likelihood of compliance with treatment protocols as well as represent a valid complementary device to increase the effectiveness of traditional NFB therapies or other approaches because treatment can be provided daily at home—a benefit, especially to ASD patients. Treatment with Mente does not preclude other forms of treatment, such as biomedical interventions and psychopharmacological treatments.

Mente is designed as a wearable, portable and wireless EEG device which is minimizing the known limitations of using neurofeedback with ASD children. Autistic children are often averse to having wires and cables placed on their heads during neurofeedback sessions as EEG is usually collected through electrodes placed on the scalp and wet with a sticky electroconductive gel. Traditional EEG caps can also limit the patient’s movements. All this may cause discomfort to ASD patients that often do not like to be touched or constrained. Being a home-based device can also enhance the success rate of the treatment as children can experience and get familiar with the new habit in the comfort of their home and with their parents. Mente can also offer flexibility regarding sessions frequency and administration thus increasing the adherence to the therapy. This is a key aspect as it can be used whenever it might be preferable during the day and eventually the therapy can be also performed sparsely to consolidate outcomes.

[1] Binaural beats are an auditory perceptual phenomenon that occurs when presenting separately to each ear two tones that slightly differ in their frequency.